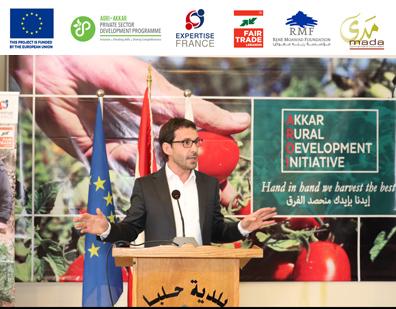 On Thursday, March 22nd 2018, Fair Trade Lebanon, Rene Moawad Foundation and Mada Association, launched and presented their Agriculture Rural Development Initiative (ARDI) in Halba. ARDI falls under the agribusiness component of the Private Sector Development Programme in Akkar, which is funded by the European Union and implemented by Expertise France.

After the Lebanese anthem, Mrs. Mathilde de Williencourt, Head of the agriculture office at Expertise France, presented the agency, its activities and emphasized on the importance for the European Union to support the private sector in Lebanon in general and the agribusiness sector in Akkar in particular. M. Julien Schmitt, Team Leader of the PSD-P, outlined the programme’s overview and stressed on its positive impact on the beneficiaries. The floor was later given respectively to M. Abd Hamid Halabi, mayor of Halba who had high hopes on this project to initiate a change in the Akkar region and to M. Philippe Adaime, CEO of Fair Trade Lebanon who acknowledged the difficult agricultural and economic situation in the Akkar region and presented the mission of Fair Trade Lebanon.

Ms. Fadwa Zahraman and Ms. Ghinwa Nafeh, respectively members of the Fneideq cooperative and Khreibet El Jundi cooperative have exposed their ‘success story’ to the participants. Both cooperatives are beneficiaries from other FTL projects.

Finally, around 150 participants attended this launching event and many raised the interest of participants on the various projects and activities. After a Q&A session answered by Mr. Bassem Hanna from Expertise France, participants were invited to a lunch buffet. Lunch menu was prepared by 3 women cooperatives: Fneidek, Khreibet el Jundi and Andaket, and mainly made using the 5 vegetables that FTL will be working on: tomatoes, pumpkins, lettuce, peppers and mloukhieh.