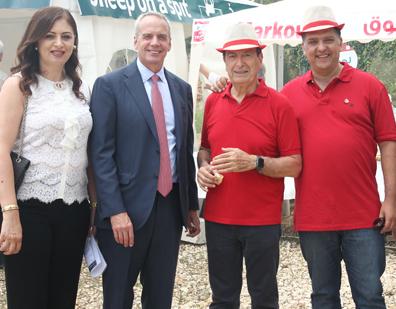 The event was held under the High Patronage of the American Embassy to Lebanon, represented by Chargé d’Affaires H.E. Edward White and the Minister of Information H.E. Melhem Riachi, represented by Mrs. Alissar Naddaf Geagea.

This event brought together hundreds of consumers and producers under the slogan "Put the Fair in Trade." The family friendly event gathered Fair Trade supporters, food influencers and Lebanese lifestyle bloggers around fresh Lebanese produce and products. Everyone at the event enjoyed a lunch buffet made up of products produced by Fair Trade Lebanon's cooperatives.  In addition, attendees enjoyed guest Chef Cynthia Bitar, from Nazira Catering, special take on Lebanese dishes including an authentic Lebanese amuse-bouche and other finely crafted delicacies. The event also showcased both Fair Trade Lebanon’s brands, Terroirs du Liban and Côteaux les Cèdres.

Bishop Guy Noujeim inaugurated the ceremony, welcomed the attendees, and thanked them for their continued encouragement and support.  Additionally, the President of the Association, Mr. Samir Abdel Malak, thanked the U.S. Embassy for its support and H.E. U.S. Chargé D’Affaires Edward White expressed how the U.S. government is proud of its collaboration with Fair Trade Lebanon and stated the U.S. government’s hope to continue building on what has been already been achieved.  Mrs. Geagea gave the closing speech, in which she highlighted Fair Trade Lebanon’s many achievements and wished them a future full of success.

Fair Trade Lebanon’s event is one of many event taking place simultaneously in 80 countries around the world. All of these events are under the banner of the World Fair Trade Organization, which promotes Fair Trade values and contributes to sustainable development by offering marginalized farmers and workers better trading conditions and securing their rights.