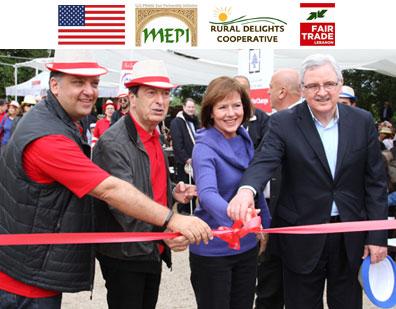 Fair Trade Lebanon celebrated World Fair Trade Day for the sixth consecutive year on May 21, 2017 at St George’s Convent, Roumiyeh. The slogan for this year’s celebration was "Trade and Fair."

The event was held under the High Patronage of the American Ambassador to Lebanon H.E. Mrs. Elizabeth Richard and the Minister for Women Affairs H.E. Jean Ogassapian. Twenty two beneficiaries of the SOFAIR project, supported by the US-Middle East Partnership Initiative (MEPI) and implemented by Fair Trade Lebanon and Atayeb Al Rif Cooperative, also joined the event and catered to more than 1200 seated guests. Guests enjoyed a variety of organic meals in a reflection of the true spirit of Lebanon’s village culture. The dishes burst with creativity, taste, diversity and the distinctive flavors of our traditional heritage. Chef Joe Barza also prepared exquisite dishes using Fair Trade Lebanon’s products.

Bishop Guy Noujeim inaugurated the ceremony, welcomed the attendees, and thanked them for their continuous encouragement and support. In his speech, the President of the Association, Mr. Samir Abdelmalak, thanked the U.S. Embassy for its continuous support. He stated that every single member of Fair Trade Lebanon (FTL) is working hard to prevent rural exodus and to help rural communities establish successful and sustainable businesses. FTL strives to ensure a social safety network by providing a decent income for all. He concluded by stressing on the fact that the association gives equal opportunities to all Lebanese from all regions without any discrimination.

H.E. Ambassador Richard congratulated Fair Trade Lebanon on its hard work and encouraged it to continue to develop and export its truly unique and authentic Lebanese products all over the world. She also stated that the products of Fair Trade Lebanon will be soon available in the USA.