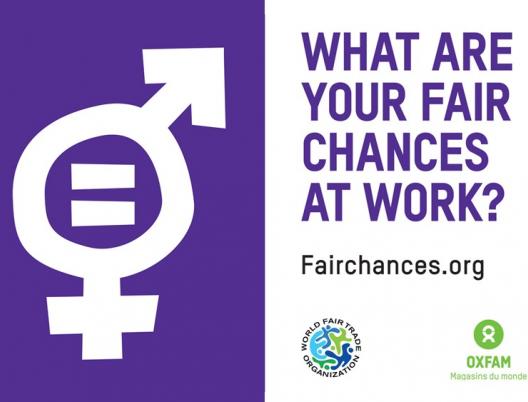 WFTO: Culemborg, The Netherlands - The fight for gender equality at workplaces is far from over. The recent reports by UN Women show that women in economic activities continue to suffer various forms of discrimination and unequal treatment. They also highlight that their labour force participation has stagnated. This reality has mobilised the Fair Trade movement to a renewed call to action to fight, harder this time, for the rights of women, especially those engaged in economic activities.

On the occasion of the International Women’s Day (IWD) on 8 March, we want to reiterate Fair Trade’s commitment to respect and fulfil women’s rights and advance their aspirations through gender equity, fair payment, non-discrimination, good working conditions and capacity building as declared in the 10 Principles of Fair Trade.

The WFTO network, including its regional office WFTO Europe, together with Oxfam Magasins du Monde embark on a global awareness raising campaign by showcasing success stories of Fair Trade contributing to gender equality at workplaces. When women succeed, communities are safer, more secure, and more prosperous. Over the last years, in the Fair Trade movement, we have seen women inspiring communities and Fair Trade organisations to stand up for women’s empowerment.

WFTO and all its members are committed to advance this important agenda. We are taking steps to empower women, to fight for their rights and their equal access to economic resources, to address all forms of violence against women and to promote women as key agents for change and drivers of sustainable development.