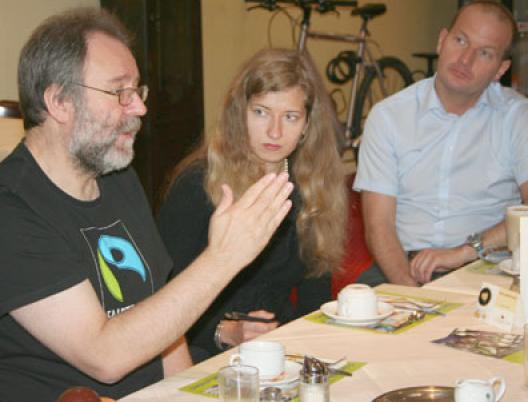 Stakeholders from around the globe in Saarbrücken

In keeping with the motto “Fair Trade across generations”, stakeholders from numerous countries will come together this September to discuss the latest developments in fair trade as well as their experiences and ideas concerning the Fair Trade Towns Campaign. The conference will be held in the cross-border region QuattroPole and will therefore also be taking place in Luxembourg and in France. As well as workshops for networking purposes on a European level and for enhancing project partnerships in the global South, there will be organised work groups on offer, concerned with the sustainable development goals of the United Nations and with various aspects of fair trade. Further topics will include innovations in social media, city marketing and positive collaboration between Fair Trade towns, schools as universities. All information about the conference and details about signing up can be found on the conference website www.quattrofair.org.

Fair Trade-Towns around the world

The Fair Trade Towns Campaign is a unique global movement in 30 countries. Approximately 2000 towns and cities around the world carry the Fair Trade Town title including London, Brussels, Rome, Saarbrücken, San Francisco and Copenhagen. Great Britain is considered the pioneer of the campaign as it is where the movement began in the year 2000 and it has since become a true model for success. In Germany, more than 480 communities carry the Fair Trade Town title. Fair Trade Towns promote fair trade on a community level and are the result of a successful network of individuals from civil society, politics and economy who take a stand for fair trade in their homes.

The Capital of Fair Trade

The host city of this year’s event, Saarbrücken, holds the title Capital of Fair Trade 2015. This award is given as part of the competition “Capital of Fair Trade” organised by the Service Agency Communities in One World. This year’s award winners will be selected prior to the International Fair Trade Towns Conference on the 14th of September 2017. As well as recognising the engagement demonstrated by the participating communities, this year’s competition will award 200,000 Euros split across five winning communities. In addition, there will be a further five prizes in the value of 10,000 Euros awarded to selected outstanding individual projects. More details can be found at http://www.faire-hauptstadt.de

The conference is organised by the Fairtrade Initiative Saarbrücken (FIS, http://www.faires-saarbruecken.de) and the QuattroFair partner organisations in Luxembourg, Metz and Trier. The conference will take place in cooperation with the International Fair Trade Towns Steering Committee, Fairtrade International and the World Fair Trade Organization.